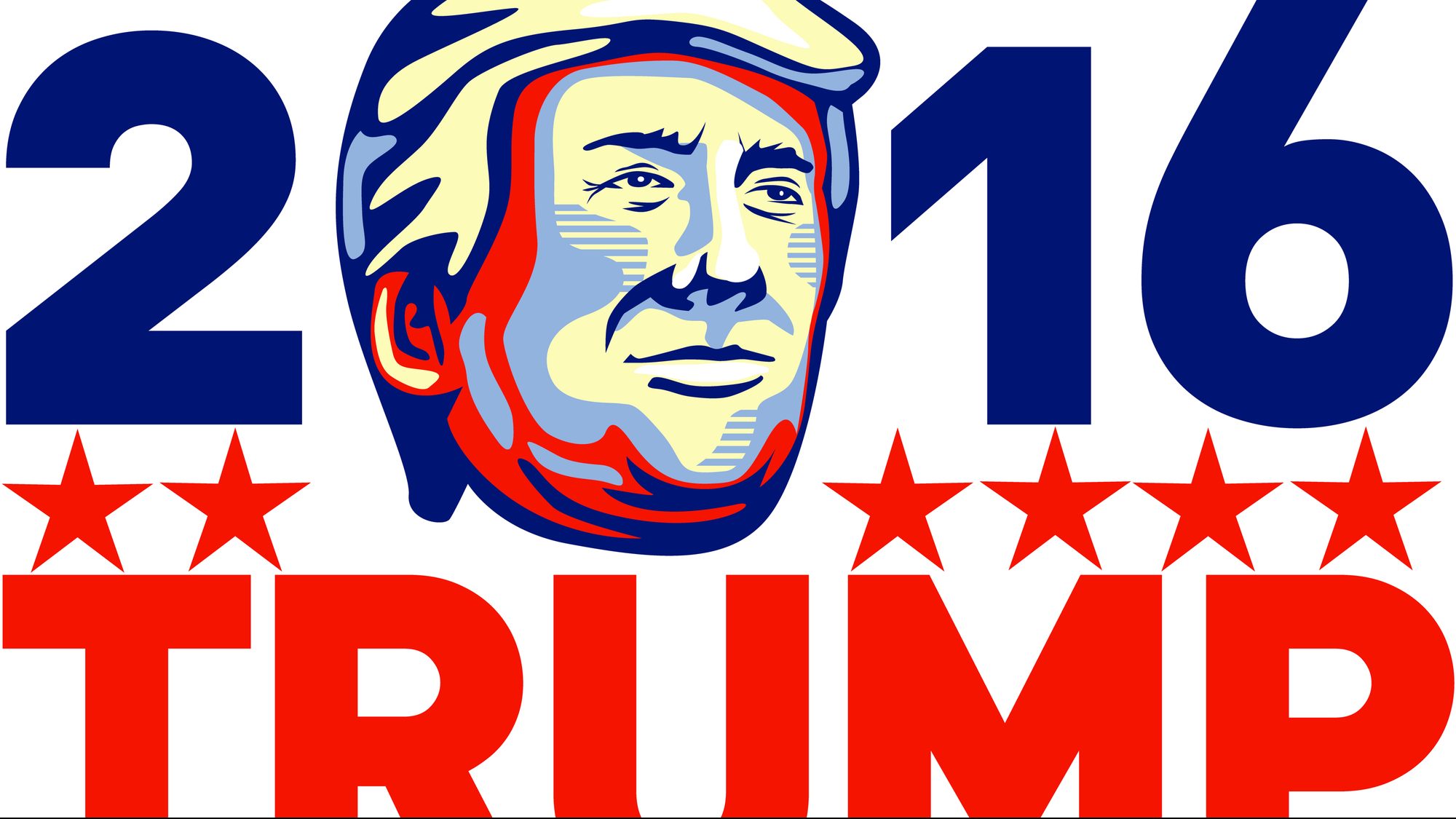 Back in September, when a Trump presidency was nothing more than an improbable nightmare for Democrats, we predicted he was not only in the race, but would likely win.

“Like him or not, if you are still in denial or in the naysayer camp, wake up. Trump has a better shot at winning this election than Clinton… and his policies will greatly impact all of our portfolios.”

The above is an excerpt from our September 18th, 2016, Weekly Volume titled Trump Takes Aim at The Fed.

As was the case with Brexit, gold soared and U.S. stock market futures tanked (Dow collapsed 850 points) Tuesday night as it became obvious Trump would win. Overnight, gold was up 3.5%…

But then, something incredible happened. Gold gave up all its gains the next morning, falling by nearly $60 dollars an ounce; and the markets, including the Dow, not only reversed their losses, but surged to a record high by Thursday.

After the initial shock wore off, the markets began to realize the Republican President-elect’s policies may result in accelerated price inflation. During the campaign Trump promised to deploy capital into the economy in a much different way than his predecessor. He wants to rebuild roads, bridges, the coal industry, etc. And the market likes that plan… 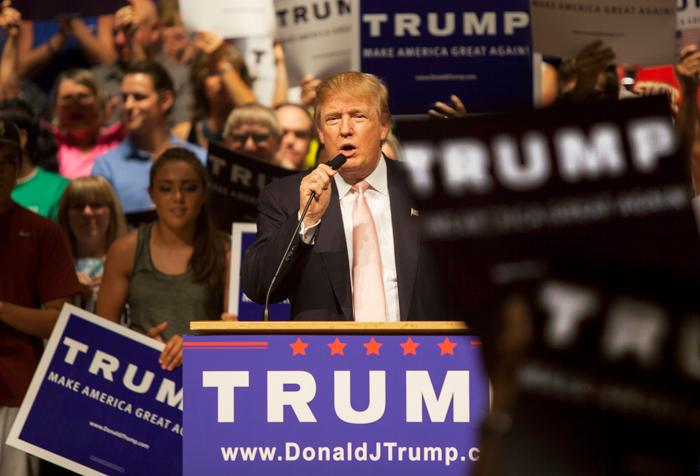 The expectations of an epic public spending binge (infrastructure) and tax cuts not seen since the Reagan-era have been the core drivers fueling the inflation trade this week… and it’s entirely justified. Copper, for instance, surged more than 10% in the 48 hours following the election.

Trump is now King of America, with virtually the exact same amount of power to initiate his agenda as Obama had in his first two years. You’ll remember that 2009 and 2010 were the years Obama cemented his legacy with the passing of Obamacare and completion of the wide-reaching Dodd-Frank Wall Street Reform and Consumer Protection Act (both of which Trump vowed to repeal). Speaking to CNBC on Thursday, former Fed Chairman Alan Greenspan said, “I’d love to see Dodd-Frank disappear,” adding it is a “disastrous mistake.”

Additionally, in his first 100 days, Obama approved the biggest stimulus program in world history, known as The American Recovery and Reinvestment Act. It was valued at nearly $1 trillion, spent over a decade. And you’ll also remember it was during those first two Obama years when commodities, stocks and particularly precious metals, skyrocketed in value. Those two years also marked a time when the TSX Venture was the best performing index in the world…

After the historic upset Tuesday, the Republican Party now controls the House, Senate and Executive (known as the trifecta). The self-proclaimed ‘King of Debt’ has become King of America…

Even the most conservative members of congress have quickly shuffled into line – praising the businessman’s sweep.

Just like Obama, who had total control in his first two years in office, Trump will look to move fast and rush the approval of his key initiatives. Within his first 100 days in office, we’ll know the entire agenda of his first term…

Right now, that agenda looks to be primarily twofold – rebuilding American infrastructure and rejigging trade deals (NAFTA). With President Trump, the TPP and TTIP are essentially dead in the water.

Despite being from different parties, Trump and Obama have one thing in common – they’re both big spenders if given the opportunity. Dramatically increasing the national debt under Trump seems likely. And that’s supportive of significant inflation, particularly if his tax plan works…

If Trump is to kick up inflation, he will have to get Americans spending again. Despite the U.S. technically being in a ‘recovery’ for seven years, the *velocity of money has not stopped declining since the Great Recession.

*The velocity of money is simply the rate at which money is exchanged from one transaction to another.

To get this chart going in the other direction, Trump plans to let Americans keep more of their hard-earned dollars. Let’s take a high-level look at the billionaire’s tax strategy for America:

The Trump Plan will collapse the current seven tax brackets to three brackets. The rates and breakpoints are as shown below. Low-income Americans will have an effective income tax rate of 0. The tax brackets are similar to those in the House GOP tax blueprint.

The ‘Trump Tax Plan’ will retain the existing capital gains rate structure (maximum rate of 20 percent). Carried interest, however, will be taxed as ordinary income. (Naturally, Wall Street money managers are opposed to Trump’s carried interest revision as it will cut their profits.) 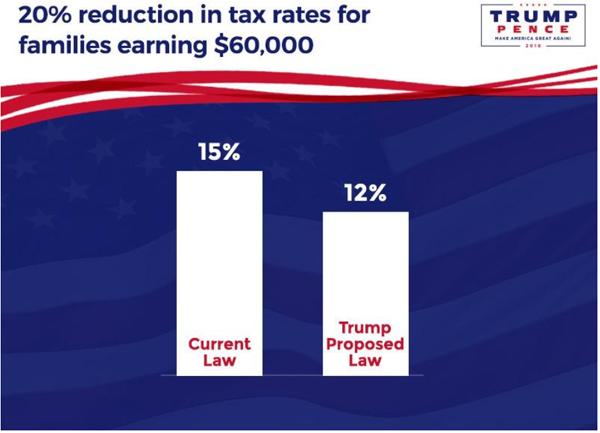 Below are Trump’s stated goals to jump-start the American economy:

If Trump can achieve two-thirds of his economic goals, which would be good for any President’s standards, the markets could soar over the next few years. And although lofty, everyone who doubted Trump in the past few years has been proven wrong time and again.

The first sign the market fall-out would not last came during Trump’s victory speech. Unlike during many campaign events, Trump appeared polished, on-script and, dare we say, even gracious. It was that decorum, something perhaps viewed as trivial by onlookers, which saved the markets from free fall. Market professionals spent months preparing for a Clinton presidency, so their skittish, knee-jerk reaction was expected. Prior to Tuesday they hadn’t completed due diligence on Trump, or his plans, and feared the worst. But for now, after doing a little homework, they’re on the Trump train…

In a phone interview with Bloomberg, Icahn said, “I tried to put a lot more to work, but I couldn’t put more than about a billion dollars to work.”

“Icahn last year described Trump as the only campaigner speaking out on crucial business and economic concerns, and has maintained his endorsement since.”

Jack Welch spoke to CNBC the morning after Trump’s historic win and said Donald’s economic plan has ‘unlimited’ opportunities. A bold statement from the former GE head and business icon.

In the CNBC interview, Welch stated in respect to moving forward and getting America going again:

“You can’t have grudges in this game, you need talent. We will win with the best people.”

Nassim Taleb, best known for his book The Black Swan: The Impact of the Highly Improbable also made a bold prediction about Trump:

“When you elect real estate salespeople to the presidency, they’re going to try deliver something.”

What Trump is set to deliver will need to have a desired effect quickly or the economy could spiral. Trump is going to have to spend in his first year like no President in modern times, and that’s saying a lot given his predecessor.

Trump knows he needs to be bold and swift, because there is a strong possibility after two years in office he could see the Senate back in Democrat control, resulting in the same gridlock Obama experienced for 6 years. Ironically, it will likely be the Republicans who need more convincing on Trump’s stimulus plan than the Democrats…

The Independent asked the question: Will he deliver on his promises, or will we end up with a ‘Trump-lite’ policy of tax cuts and protectionist deals?

Hamish McRae from the Independent highlights the epic reduction in corporate taxes Trump has proposed:

The public will only tolerate this plan if the economy and GDP expand rapidly. This plan can’t take 5 or 10 years to bear fruit. The deficits will be too high by then. Trump is going to go all-in on small businesses and the American worker by letting more cash stay in the private sector.

There are bullish potential outcomes, but also concerning possibilities with President Trump. The foremost threat of the coming Trump presidency to your portfolio is a trade war. Just ask Mexico how concerned they are by Trump’s plan for trade. The peso lost roughly 13% in the 24 hours proceeding Trump’s victory – its worst loss since the Tequila Crisis 22 years ago.

The first trade deal Trump addresses will be hyper-analyzed by Wall Street and the world markets. The biggest fear of a Trump presidency is that America turns into a protectionist state… the nation did it before under Herbert Hoover (we’ve written about the comparisons of Hoover and Trump here) and others; and anyone who ignores history does so at their own peril. In fact, protectionism is quite Americana, particularly in the country’s earlier days. It was Republican President Abraham Lincoln who once said “The abandonment of the protective policy by the American government will produce want and ruin among our people.”
In our Volume comparing Trump to Hoover, we documented some of the striking similarities:

“…Hoover ran a campaign promising farmers that he would reignite their failing enterprises by increasing tariffs on agricultural products. Hoover won the 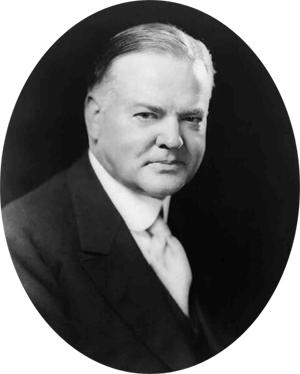 election in a landslide with Republicans President Hoovertaking the House and Senate.

If Trump goes the protectionist route, as hinted during the campaign, we will be going largely to cash… for now, however, we’ll cautiously assume much of that campaign talk was rhetoric.

Lastly, Trump’s victory has emboldened the populist movement in Europe. With Brexit a done deal, Frexit and Quitaly could be next. If they come to fruition, even just one of them, the EU is finished. This will cripple stock markets around the world; but that’s a tale for another Volume…

In our Weekly Volume from September, we warned:

“Today’s bear markets could boom under Trump, and vice versa. Just last month Trump announced he would spend between $800 billion to $1 trillion rebuilding infrastructure in America.”

Donald Trump promised in his victory speech that he would make America’s infrastructure “second to none.” The amazing thing is that he has the legislative firepower to make many of his initiatives a reality.

On the campaign trail, Trump promised to create an infrastructure fund by issuing infrastructure bonds from the United States government. He boasted, “We’ll get a fund, make a phenomenal deal with low interest rates and rebuild our infrastructure.”

Estimates from $500 billion upwards to $1 trillion on infrastructure have been thrown around by the Republican President-elect.

A Final Warning on Trump’s Plan to Spend

“Reducing the budget deficits, while cutting tax rates at the same time, will be difficult without sizable cutbacks in federal spending. If a Trump administration manages to push through tax cuts with matching spending cuts, federal budget deficits, which are already trending higher, will probably increase substantially, in our view.”

The reality is that the American national debt is going to increase substantially under Trump. He’s not a classic conservative by any stretch. From an economic standpoint, consider him a hybrid of Bill Clinton, Herbert Hoover and Ronald Reagan. If his new spending and tax plans create lasting jobs and real, consistent GDP growth of 3% to 4%, America could experience an economic boom. This would lead to inflation, rising commodity prices and a continuation of this epic American stock market bull.

It’s a new era in geopolitics and for the world economy. What’s for certain is that it won’t be more of the same from the White House. Trump will either win or lose ‘big league.’