The CSE is the most liquid junior exchange in Canada. Day after day it trades more total volume than its Canadian counterpart, the TSX Venture. The CSE’s real ascension began in 2017 and remains tied inextricably to the marijuana sector. With 29 of its largest 30 issuers by weighting operating within the emerging cannabis space, the CSE is Canada’s weed exchange.

While the CSE has had too many success stories to list in recent months – many of them hailing from the marijuana-related sector – one stands out. FSD Pharma (HUGE: CNX) had a market of little over $800 million at the close Tuesday. Its market cap has exceeded well over $1 billion in recent weeks and is the largest issuer on the CSE. 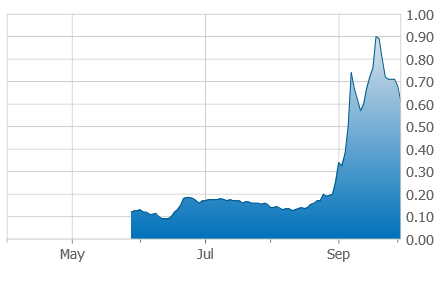 Like some marijuana or CBD-related deals, FSD Pharma went parabolic in September. From a low of $0.075 in June to a high of $0.94 on September 20th – shareholders are still on a wild ride. The company’s shares shed 10% Tuesday, closing at $0.61 after more than 31 million shares exchanged hands. Incredibly, 31 million shares is a low volume day compared to the action of mid-September. FSD Pharma traded hundreds of millions of shares in mid-September.

FSD Pharma commented on the record volume at the time,

FSD Pharma traded in a range between $0.51 and $0.88 on September 11th. On FSD Pharma’s homepage, the first thing investors read is:

HUGE broke the all time Single day, Weekly, Monthly and Yearly trading volume records on the CSE. HUGE traded over a billion shares in less than 2 months!”

As investors, historic liquidity events such as this should shine light on the average psyche of retail investors. Furthermore, it provides stunning evidence to amount of capital moving into Canada’s junior markets. The game has changed. Truly it has. Check out the Top 11 issuers and their sizeable composite weightings below:

Not most, but all 11 companies above call the marijuana-related space home. As far as Canada goes, the CSE has cornered the hottest market in the world. Even more, the top 29 issuers on the CSE are marijuana-related.

On the CSE index, not until the 30th largest company, by weighting as of October 2nd, does one find a deal unrelated to marijuana. Amazingly, the top 29 issuers by weighting fall within the life sciences or diversified industry sectors (both of which contain marijuana-related issuers). The lone mining company, or 30th largest issuer, has a weighting of just 0.76%.

So, the marijuana sector hasn’t just saved the CSE or the Canadian small-cap markets; it is the CSE. All the excitement, all the liquidity is focused here, right now. We are in the midst of a bull market, unlike anything I have ever seen.

Special Note: According to thecse.com,

“The CSE Composite Index is a broad indicator of market activity for the Canadian Securities Exchange (CSE). With approximately 75% coverage of all equities listed on the CSE it is a uniquely positioned gauge of the Canadian small cap market.”

So, what does FSD Pharma do? Why are they leading the latest resurgence on the CSE for marijuana-related investments?

The company is headquartered in Cobourg, Ontario. And, much like Canopy Growth’s move to buy and revitalized the once-abandoned Hershey chocolate factory in Smith Falls, Ontario, FSD Pharma is doing the same to a former Kraft plant.

Special note: According to BusinessInsider.com,

“The 42-acre former chocolate factory located at 1 Hershey Drive was sitting vacant when Canopy Growth scooped it up in January 2016 for $6.6 million.”

FSD Pharma’s facility is located about an hour’s drive from Toronto. According to the company, FSD Pharma’s mission is to transform the facility into the largest hydroponic indoor cannabis facility in the world. And, as is the case with most large issuers, “FSD Pharma intends to target all legal aspects of the cannabis industry, including cultivation, processing, manufacturing, extracts and research and development.”

Simply growing marijuana is not enough anymore. Marijuana or cannabis and CBD oil or CBD-infused drinks are spilling over into dozens of products.

In a September 23rd press release, FSD Pharma announced the launch of a comprehensive sponsored research program in Tel Aviv University together with its strategic R&D partner, SciCann Therapeutics Inc.

The company reported the research program was to focus on the cardiovascular disease field. And, that,

“The new research program is aimed at the development of novel and proprietary cannabinoid-based treatments for the prevention and treatment of atherosclerosis, the underlying factor for most cases of stroke and cardiac stenosis events in the western world.”

Cannabinoid-based treatments are now being applied and tested in a bid to cure numerous ailments.

FSD Pharma and the other top 29 issuers by weighting on the CSE are creating a new reality for investors in Canada. The CSE is the place to be for everything marijuana-related. Because of this, the exchange has become extremely volatile. It fell 3% today, closing to 961.28. After cruising back above 1,000 in late September, the exchange is still down huge from its high above 1,600 in January of 2018.

From marijuana to CBD-infused anything, the rise of the hottest space on earth is nowhere near over. Capital will continue gravitating to the space as long as innovation and adoption prevail.