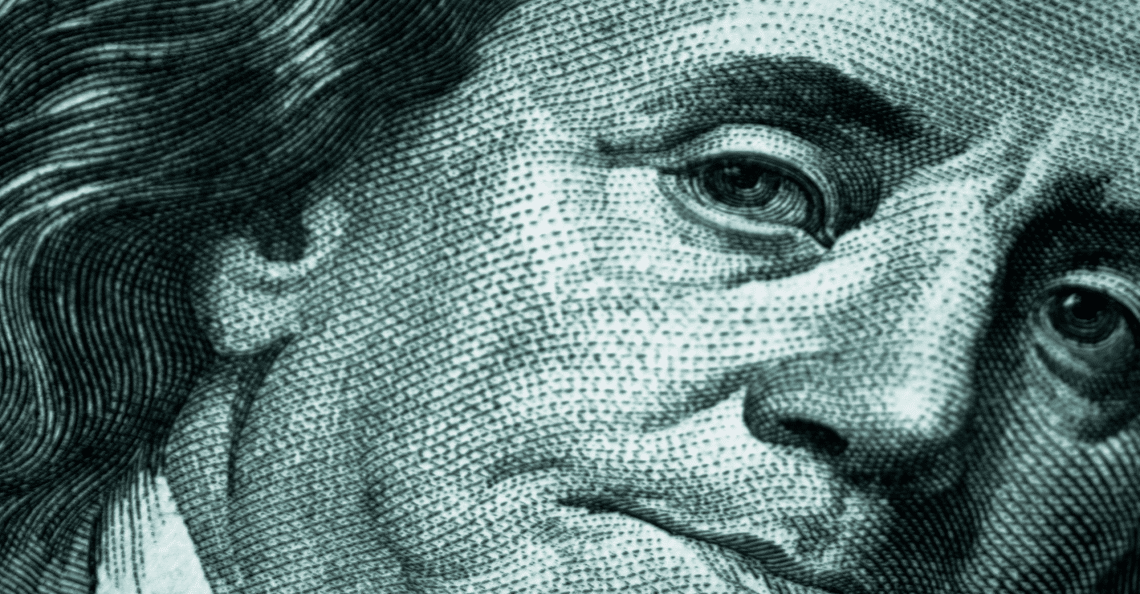 Everything seems to be going up but the U.S. dollar (with the exception of Friday’s trading). The Dow Jones cleared 22,000, and other US indices broke to new all-time highs this past week. Copper hit fresh 2-year highs, and gold exploded to $1,273.60 an ounce Wednesday. These price movements are because of a falling U.S. dollar. In fact, the U.S. dollar, when compared to a basket of its peers, is down roughly 8% thus far in 2017 – its worst start since 1985.

If the U.S. dollar continues its downtrend, gold and commodities will enter a bull market not seen since the beginning of this decade.

Also, President Trump has dubbed China, Japan, and Germany currency manipulators; translation: he wants the U.S. dollar to fall and other global currencies to rise…

His plan is working.

Trump has continued to talk down the U.S. dollar, commenting in an interview with the Wall Street Journal and posted by Politico on August 2nd that,

“I mean, I’ve seen strong dollars. And frankly, other than the fact that it sounds good, lots of bad things happen with a strong dollar.”

Just days after Trump’s victory, (which we accurately predicted would likely happen in September, 2016) we released a piece titled The Inflation President; A short trade on the dollar index when we published that piece would have worked out rather nicely (US Dollar Index is down nearly 6% since then). Meanwhile, China’s yuan has traded at 9-month highs recently.

Gold and Commodities Win When the U.S. Dollar Loses

The dollar is the benchmark pricing mechanism for the majority of commodities. When the currency declines, commodities typically increase in value.

As you know, the U.S. dollar is the world reserve currency. Just before the end of WWII, the Bretton Woods Agreement was signed, effectively making the U.S. dollar the ultimate reserve currency by fixing its value to gold. While it’s common knowledge this agreement ended in 1971 with Nixon closing the gold window, the dollar has been a relatively stable foreign exchange instrument ever since. It is also backed by the U.S. military – not coincidentally, the strongest fighting force in the world.

For the most part, the majority of nations continue to go along with this pre-established system – particularly in the West. However, certain nations, led by China and Russia, have complained about unfairness and are working to undermine the dollar. While China has recently increased U.S. Treasury holdings, 2016 was a different story. China’s holdings of U.S. Treasuries declined by the most on record last year, and Japan also reduced its holdings, for the second straight year. In contrast, 2017 has seen both nations add dollars to their reserve holdings.

China and Russia | An Alliance Forged in Freedom and Gold

While China quietly increases its holdings of US Treasury debt, its currency has been making leaps and bounds in usage for international trade. For years, China has been demanding — and is now receiving — global respect for its yuan. As a result, the currency is at a nine month high.

Pegged to the U.S. dollar, China’s yuan is nearing the day when it will float freely, providing a liberalized capital market. In a May opinion piece, titled China’s Deleveraging Puts the Yuan Closer to a Free Float, Ben Emons explains,

“Central bank policy stipulates that the yuan is restricted to moves of no more than 2 percent either side of the reference rate. A quicker transition to a market-determined exchange rate would allow China to stem the drop in foreign-currency reserves, maintain control over domestic monetary policy, and deter political criticism of currency manipulation.”

In October of last year, China’s yuan joined the IMF’s special drawing rights (SDR) basket. Although it makes up roughly 11% compared to the U.S. dollar’s 41% of the SDR, it is a major accomplishment.

According to Reuters, The People’s Bank of China stated that,

“The inclusion into the SDR is a milestone in the internationalization of the renminbi, and is an affirmation of the success of China’s economic development and results of the reform and opening up of the financial sector.”

We’ve mentioned this before, but as the U.S. dollar falls, the yuan is positioning itself as an alternative.

We wrote about the global ramifications of the world’s growing adoption of the yuan in international trade last August. Read our report A World Currency is Born.

President Trump signed a bill implementing sanctions on Russia for its interference in the 2016 presidential election. While Trump has dubbed the bill “clearly unconstitutional” he not only signed it but said, he would not allow the U.S. to “tolerate interference in our democratic process and that we will side with our allies and friends against Russian subversion and destabilization.”

“In response to the sanctions, Russia said the U.S. has until Sept. 1 to cut its diplomatic staff in the country by 755 people.”

These actions by the Trump Administration will further alienate Russia and its key ally China; and they could very well backfire on America’s economy…

With the Fed’s plan to reduce its balance sheet, which has swelled to over $4.5 trillion, the central bank will need support from foreign nations to buy its bonds.

In a Zero Hedge article titled Moscow And Beijing Join Forces To Bypass US Dollar In Global Markets, Shift To Gold Trade, a gold-backed currency comes into focus,

“If Russia – the world’s fourth largest gold producer after China, Japan and the US – is indeed set to become a major supplier of gold to China, the probability of a scenario hinted by many over the years, namely that Beijing is preparing to eventually unroll a gold-backed currency, increases by orders of magnitude.”

“Bypassing the US dollar appears to be paying off: according to the Chinese State Administration of Taxation, trade turnover between China and Russia increased by 34% in January, in annual terms. Bilateral trade in January 2017 amounted to $6.55 billion. China’s exports to Russia grew 29.5% reaching $3.41 billion, while imports from Russia increased by 39.3%, to $3.14 billion. Just as many suspected, with Russian sanctions forcing Moscow to find other trading partners, chief among which China, this is precisely what has happened.”

China and Russia continue to be among the world’s largest buyers and believers in gold. Bloomberg reported that, according to the Chinese Gold & Silver Exchange Society, China is set to boost imports through Hong Kong by 50% in 2017. The reason: investors seek to protect their wealth from currency risks, a slowing property market and volatile stocks.

China is on pace to import about 1,000 tons of gold this year – the most since 2013. China and Russia are preparing for a new reserve currency to emerge and dominate the East (backed by gold) or a more balanced global currency (SDR) basket.

“We discussed the question of trade in gold. BRICS countries are large economies with large reserves of gold and an impressive volume of production and consumption of this precious metal. In China, the gold trade is conducted in Shanghai, in Russia it is in Moscow. Our idea is to create a link between the two cities in order to increase trade between the two markets.”

The U.S. dollar is under pressure, with global investors and sovereigns searching for an alternative. A currency backed by gold, free from government and central bank exuberance, may look appealing should the next crisis rear its head.

*N.B. An example of the desire/growing demand for an alternative currency can be found in Bitcoin. Backed by nothing but faith, yet somewhat decentralized, investors are buying into the cryptocurrency the world over. It has become such a popular alternative currency that even Bill Gates said it can’t be stopped by anyone. According to coindesk.com,

“A new patent application from Mastercard suggests that the global credit card issuer is exploring ways to build refund services for cryptocurrency users.”

Western Central Banks, Led by the Fed, Have a Problem

Few know this, but central banks have bought more than $1.5 trillion worth of assets in 2017. In fact, on June 9th, Zero Hedge reported,

“…central banks have bought $1 trillion of financial assets just in the first four months of 2017, which amounts to $3.6 trillion annualized, “the largest CB buying on record” according to Bank of America.”

With President Trump on a mission to devalue the dollar, and debt running rampant, a growing spectrum of investors view gold as an appealing investment. And the prospect of a gold backed currency would appeal to nearly everyone. We are not saying it is going to happen in the near term, or even at all, but the potential for it would be enough to send gold to record highs…

The IMF truly has the last clean balance sheet in the world – and you better believe it will be called on during the next crisis. But if the U.S. slips into recession before it can normalize its balance sheet, America will run unsustainable trillion-dollar deficits. This would result in a crisis of confidence in the dollar and the perfect opening for a new reserve currency – something with more than just faith backing it.

How many of you believed U.S. Federal Reserve Chair Janet Yellen when she, according to Reuters, stated she does not believe that there will be a run on the banking system at least as long as she lives?

Foolish to make such a prediction when US government debt has exploded by $10 trillion in the last decade and the country continues to run annual trillion dollar plus deficits… she was likely trying to make a sales pitch – all part of the Bernanke-implemented Federal Reserve ‘communication strategy.’

We’ll stay cautiously diversified, and are happy to hold gold and gold related equities with this President and Fed chairwoman running the show.

We are bullish on gold and the yuan in the coming quarters. It is our view that gold will continue to underscore the Chinese yuan as the currency builds momentum into 2017 and beyond.