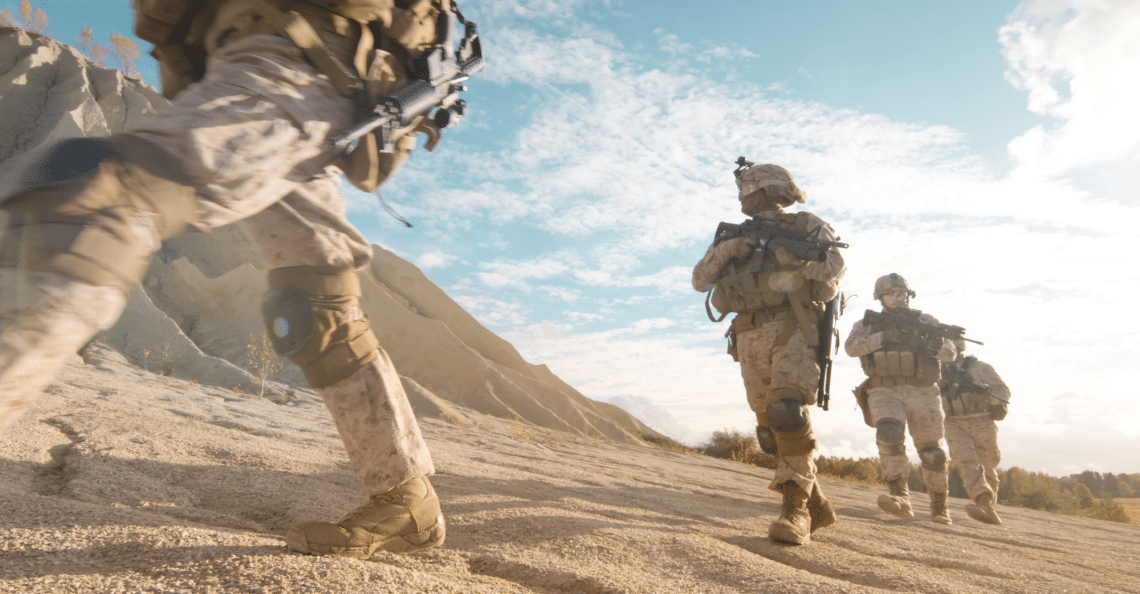 Two invasions currently being contemplated could change the world for decades to come, and thus, how we all invest. One is an invasion of the White House, the other of Iran. One may help Trump and the US dollar, while the other could impede the President and possibly even get him impeached. When we say ‘invasion’, we are not referring to a charge the gates type of attack, or a Desert Storm-style war. It is much more covert than that… after all, there are many ways to topple a leader — the most powerful of ways is through economic means. The second occurs through relentless character assassination. The latter is particularly relevant in Western democracies.

War does not hurt stocks. Political turmoil does, since it creates an unbearable level of uncertainty…

National Security and the Invasion of the White House

It is no secret President Trump is not a friend of the ‘establishment’. From holdovers of the Obama appointed intelligence community, to the Clinton campaign, to mainstream media and longtime politicians on the Right and Left; opposition is plentiful. For better or worse, Trump is a disruptor. He has made many enemies, both at home and abroad…

These enemies/adversaries have tried to stop him, going to great lengths to do so… to date, they have not been able to touch the new Teflon Don. However, those close to him have not been so fortunate (former campaign manager Paul Manafort and Rick Gates are a few names that come to mind). This week, a shocking revelation from the New York Times was released…

Spying on member(s) inside the Trump Campaign (potentially via Carter Page who worked for Trump), or an outright mole planted inside, may have been foundational to “Hurricane Crossfire,” which kicked off roughly three months before the election. The intent of the operation, ran by the FBI under Obama’s leadership, was to see what connections Trump, or his team, may have had to Russia’s meddling in the election. What makes this operation so controversial, aside from the fact it involved spying on the current President’s inner circle at a minimum — and possibly the President himself — is that there is good reason to believe this surreptitious operation was politically motivated.

Hurricane Crossfire and National Security in the era of Trump

“Such tactical discussions are reflected in one of Mr. Strzok’s [FBI agent with political bias against Trump] most controversial texts, sent on Aug. 15, 2016, after a meeting in Mr. McCabe’s [Andrew McCabe, then Deputy Director of the FBI] office.”

“I want to believe the path you threw out for consideration in Andy’s office – that there’s no way he gets elected,” Mr. Strzok wrote, “but I’m afraid we can’t take that risk. It’s like an insurance policy in the unlikely event you die before you’re 40.”

In the article released on Wednesday from the New York Times, authored by Matt Apuzzo, Adam Goldman and Nicholas Fandos, it stated,

“The F.B.I. obtained phone records and other documents using national security letters – a secret type of subpoena – officials said. And at least one government informant met several times with Mr. Page and Mr. Papadopoulos, current and former officials said. That has become a politically contentious point, with Mr. Trump’s allies questioning whether the F.B.I. was spying on the Trump campaign or trying to entrap campaign officials.” 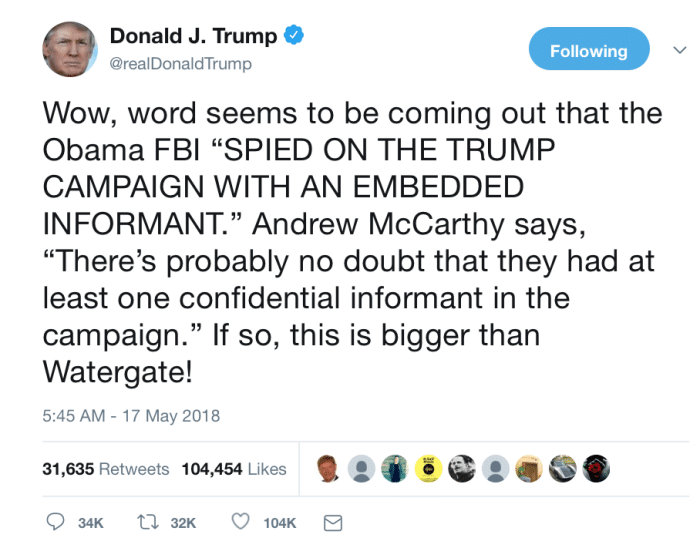 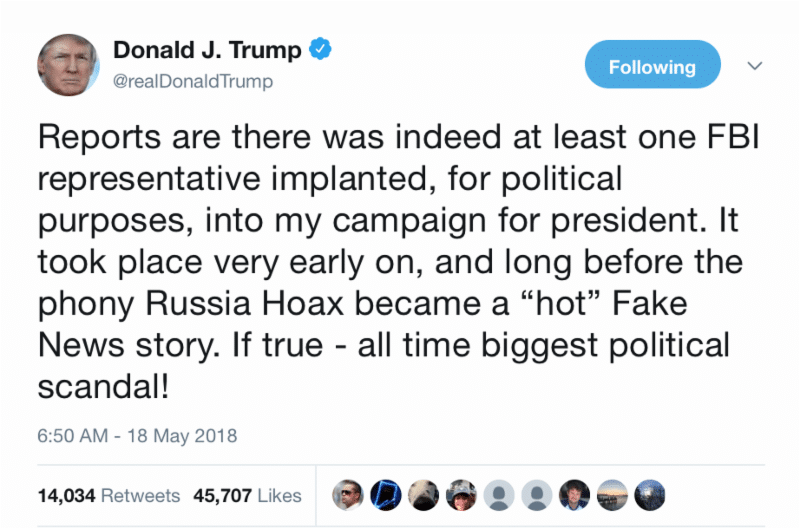 Kimberley Strassel, Potomac Watch columnist for the Wall Street Journal, known for her hard-hitting reporting on Washington politics, went off after the release of this New York Times piece. Strassel claims it was only the tip of the iceberg of what went on…

Devin Nunes, the fiery Republican congressman who has questioned how this counter-intelligence operation on Donald Trump’s circle begun, did an interview last week explaining his concerns:

Why should active investors care about this political drama? Because of this year’s mid-term elections in the US. If the Democrats can win the House and Senate (which some pundits are suggesting they will), impeachment proceedings against Trump will likely follow. When Nixon resigned due to imminent impeachment proceedings from the Watergate scandal, the markets tanked nearly 20%…

As a country, you may be asking for trouble if you trade your goods outside of the US dollar… think back to Libya in 2011.

For years, Iran has been trying to get away from trading in US dollars, long before Obama’s 2015 nuclear deal. However, after the nuclear agreement, Iran played nice by using the dollar when trading its oil. Unfortunately, that did not last long. Tensions between Iran and the United States heated up shortly after Trump was elected and announced his so-called ‘Muslim travel ban.’ That did not go over well with Ali Khamenei – Iran’s supreme leader. Moreover, rhetoric of getting away from trading its oil in US dollars once again kicked into high gear. Iran actively sought to trade in other currencies such as the yuan and euro as a way of showing defiance against the US. Consequently, it is now on the verge of making that reality.

Last month, once Iran deemed Trump would be leaving the nuclear deal (which was constructed by the Obama Administration), Tehran made a proactive move. The Iranian government came out publicly and stated they would no longer officially trade their crude in US dollars, opting to conduct business in euros instead…

Bear in mind, Iran is the third largest oil producer in OPEC, and controls the strategically located Strait of Hormuz. Twenty percent of the entire globe’s oil supply utilizes this corridor. It is also critical to note that Iran’s largest trading partner is China, an economic power which has been critical of US monetary policy. Furthermore, China is one of the world’s largest owners of Treasuries. The less China trades in dollars, the worse it is for US hegemony.

The most dangerous aspect of all for Trump in this Iran struggle is that his European allies, which includes Italy, France, England and Germany, are not supporting his move to end Obama’s deal from 2015. An unintended consequence for Trump, and America as a whole, is that global trade in the euro may increase substantially if sanctions are imposed on Iran by his administration.

According to RT, a European diplomat told the Russian funded news agency:

“I’m privy to the information that the EU is going to shift from dollar to euro to pay for crude from Iran.”

It is clear that EU leadership plans to keep the Iran deal in place. The costly, and potentially diplomatically treacherous action as a result, is that the EU may use the euro to trade in Iranian crude. A big deal for several reasons:

First, it sets a dangerous precedent in the West (allies since World War II) about acting unilaterally when it comes to Middle East policy. If this occurs, and EU countries buy Iranian crude in euros — essentially ignoring Trump’s agenda — there will be tremendous economic fallout, both from trade and a currency valuation perspective. The EU imports approximately 25% of all Iranian crude…

The European Union’s High Representative for Foreign Affairs and Security Policy, Federica Mogherini, said on Tuesday after meeting with the foreign ministers of the UK, France, and Germany, and separately with Iran’s foreign minister that,

“We, together, regretted the withdrawal of the United States from the Iran nuclear deal and we recognised that the lifting of nuclear-related sanctions and the normalisation of trade and economic relations with Iran constitute essential parts of the agreement.”

Reneging on the Iran deal has the potential to blow up in Trump’s face, thus resulting in a capitulating market. Hence the threat of rising global uncertainty. Remember what happened to the markets just a couple months back when Trump enacted tariffs on China? That would be merely a prelude of things to come if he feels the need to do the same with some European countries.

The European powers that be, along with US hanger-ons from the Obama Administration, refuse to go along with Trump’s Iran agenda. Just last week, former Secretary of State John Kerry was seen leaving a private meeting with Iranian officials in Paris. Why? This man is supposedly out of office and power… think again. He and Obama are still very much rooted in American foreign policy.

According to Zero Hedge, “Iran’s Foreign Ministry Spokesman Hossein Jaberi Ansari has just warned Western politicians that if they do not put pressure on the Trump administration the Iranian regime will leak the names of all officials who accepted bribes to pass the disastrous deal in the first place!”

If we have learned anything about Trump over these last 17 months, it is that he will not sit by and watch things unfold.

Although Trump has not imposed any official sanctions yet, many believe they are imminent. The outcomes of Iran and North Korea will define Trump’s foreign policy legacy, and possibly US dollar hegemony.

Trump to Crush Iran and Stir Up Arab Spring

By crushing the Iranian economy with sanctions, Trump (or his advisors) likely hope it will stir an uprising akin to the Arab Spring, which toppled regimes in Egypt, Libya, Yemen and likely Syria.

According to Free Beacon, “The plan, authored by the Security Studies Group, or SSG, a national security think-tank that has close ties to senior White House national security officials, including National Security Adviser John Bolton, seeks to reshape longstanding American foreign policy toward Iran by emphasizing an explicit policy of regime change, something the Obama administration opposed when popular protests gripped Iran in 2009.”

“One source close to the White House who has previewed the plan told the Free Beacon that the nuclear deal, also known as the JCPOA, solidified the Iranian regime’s grip on power and intentionally prevented the United States from fomenting regime change…”

The White House, historically a symbol of freedom and democracy for the American people, is ironically being challenged by a collective of Americans, Iranians and potentially some Europeans. Whether it be through character assassination on the home front, or long-time allies ignoring Trump’s potential Iran sanctions overseas (and thus increasing global trade in euros), the result may be the same: removal of power through subterfuge. Finally, should Trump be removed or his power muted, the investor will pay.