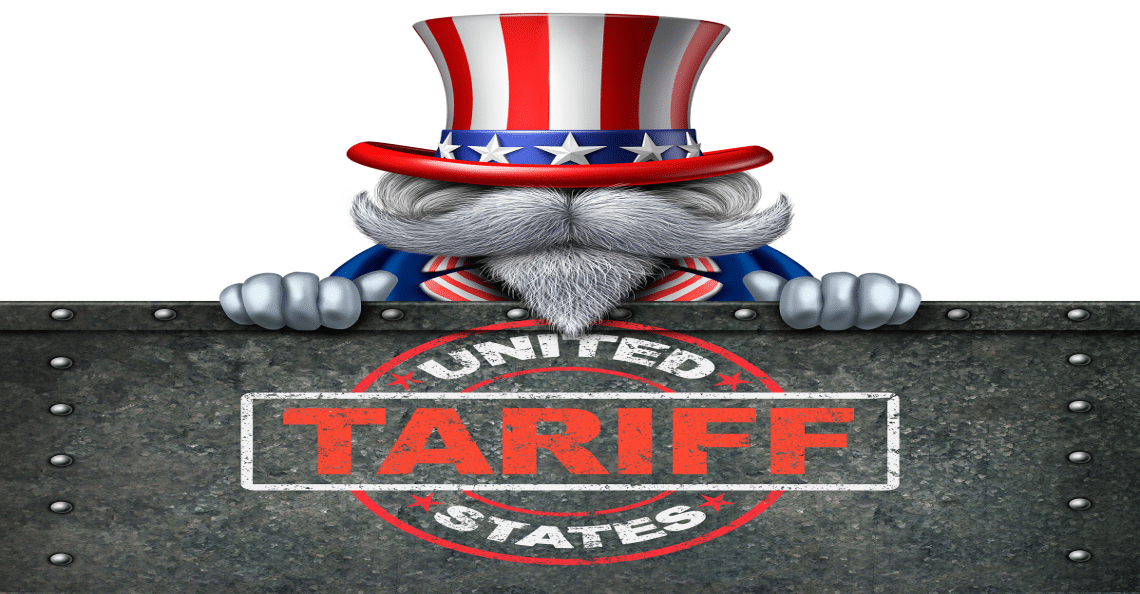 “…China is not afraid of and will not recoil from a trade war. If a trade war were initiated by the U.S., China would fight to the end…” 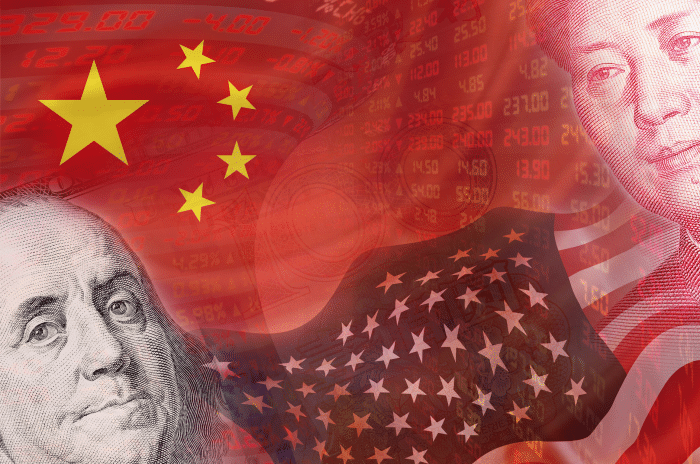 That statement was made on Thursday by China’s embassy, after President Trump announced $50 billion+ in tariffs against the Chinese. The Dow dropped over 700 points the same day – its worst decline in 6 weeks…

The positives surrounding Trump’s election win were numerous from both a business sentiment sense and the market’s immediate performance. However, those feelings are fleeting as a fractured Administration fires the first shots in an escalating trade war.

While natural optimists, we always have one eye on the potential downside. Speculators must know what the downside is, its likelihood, and how to protect themselves in any event. Days after Trump’s victory, we published a Volume which dubbed Trump The Inflation President. As expected, the U.S. is set to run trillion dollar deficits as Trump prepares to spend on infrastructure and the military like no President before him.

While the majority of our November 2016 report pointed to the potential positive market outcomes of a Trump Presidency, our most prescient headline warned:

“The biggest fear of a Trump presidency is that America turns into a protectionist state… the nation did it before under Herbert Hoover (we’ve written about the comparisons of Hoover and Trump here) and others; and anyone who ignores history does so at their own peril. In fact, protectionism is quite Americana, particularly in the country’s earlier days. It was Republican President Abraham Lincoln who once said “The abandonment of the protective policy by the American government will produce want and ruin among our people.”

In our Volume comparing Trump to Hoover, we documented some of the striking similarities:

“…Hoover ran a campaign promising farmers that he would reignite their failing enterprises by increasing tariffs on agricultural products. Hoover won the election in a landslide with Republicans taking the House and Senate.

Read The Inflation President and Why Gold Will Surge with President Trump.

Trump Turns Back the Clock in Trade War Tariff

As the Great Depression worsened following the protectionist Smoot-Hawley Tariff Act, the Reciprocal Trade Agreements Act of 1934 was born. Then the General Agreement on Tariffs and Trade in 1948 was enacted, followed by the current system known as the World Trade Organization, implemented in 1995.

President Trump is turning back the clocks in a move directly from the Hoover playbook. Consequently, a trade war is breaking out just as we had feared…

Trump is taking the most significant economic gamble of his Presidency; hence his increasingly hostile stance towards America’s largest trading partners, including Canada, China and Mexico.

While America is by far the most balanced and resilient economy on the planet (debt aside for the moment), the narrative that pushed US stocks to all-time highs is faltering. Regretably, with evolving tax policies coming from Ottawa and new regulations, for the majority of Canadian industry there is no competing with America, only losing. Remember, we export 99% of our oil south.

President Trump held a press conference at the White House Thursday which sent global markets into a tailspin. Trump signed an executive memo instructing U.S. Trade Representative Robert Lighthizer to levy tariffs on at least $50 billion in Chinese imports. Trump continually lambasts the Chinese and repeatedly points to the trade deficit between the two countries. 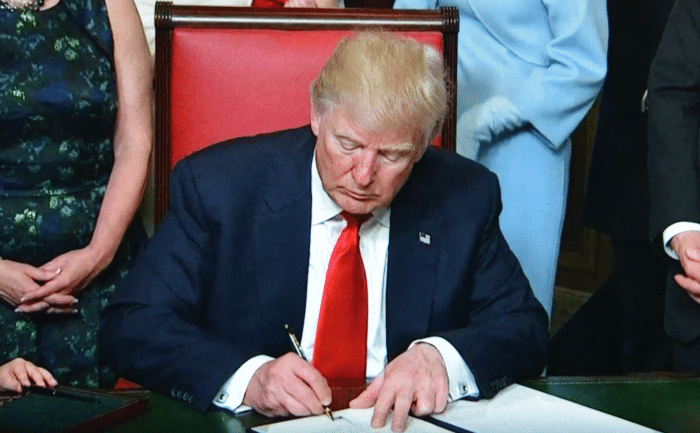 The tariffs will be imposed via Section 301 of the 1974 US Trade Act and focus on Chinese high-tech goods. Lighthizer also explained there will be restrictions on Chinese investments in the US.

“For years, China has forced US companies to turn over valuable source code and other intellectual property as the price of gaining entry to one of the world’s “most lucrative developing markets.” But Trump and his protectionist allies have argued that this is a blatant violation of WTO rules.”

“The word that I want to use is reciprocal. When they charge 25% for a car to go in, and we charge 2% for their car to come in to the United States – that’s not good.”

“The U.S. will impose 25 percent duties on targeted Chinese products to compensate for the harm caused to the American economy from China’s policies, according to a fact sheet released by USTR.”

“Trump has said that the tariffs would apply to a list of 100 products, primarily technology exports.

“The U.S. is looking to restrict imports of goods that would harm Beijing, but cause relatively little harm to U.S. consumers and companies.”

Government industrial policy in China, for example, has allowed its steel and aluminum sectors to flourish. Trump wants to level the playing field, and it’s hard to blame him. Obama long complained about China not playing by international trade rules, but failed to provide any solution. The 2016 G-20 Summit held in Hangzhou, China is a perfect example.

“In Hangzhou, President Obama reiterated the United States’ support for an open, integrated global economy, underpinned by a level playing field that gives workers and businesses a fair opportunity to compete.”

“G-20 leaders recognized that excess capacity in steel and other industries is a global issue that requires a collective response.”

“…the United States will continue its efforts to address many of the trade-related challenges in the global steel industry. This includes enforcing 160 anti-dumping and countervailing duty orders on steel and steel-related products, tracking U.S. and global steel trade flows, working to address evasion of anti-dumping and countervailing duties and upholding U.S. rights under trade agreements.”

So, while Trump’s brash tariffs may not be the right path, they are a path to increasing U.S. competitiveness. But it won’t come without retaliation… and a cost in the short term.

“China is indeed likely to retaliate. Beijing contends it has improved its protection of intellectual property and that it is moving fast to further liberalize its economy. It also is putting together a package of retaliatory measures against U.S. tariffs that include its own tariffs on soy, sorghum and live hogs-some of which are exported from states that were big supporters of Mr. Trump in the 2016 presidential election.”

Iowa, for example, shipped $12.4 billion worth of soybeans to China last year; soybeans from Iowa represent the bulk of US agriculture exports which stood at $19.4 billion in 2017.

“Baseline: Under the baseline, we expect China would actively negotiate with the US to avoid an escalation of trade frictions. The US administration has reportedly asked China to reduce the bilateral trade deficit by $100bn. It is not clear what the time horizon for this goal is, though the number itself is too large to be achieved in a short time period (and definitely not before the US mid-term election).”

As a share of U.S. imports, China’s most valuable exports include: electrical machinery, mechanical appliances, computers and cellphones.

As a share of Chinese imports, America’s most valuable exports include: electrical machinery, mechanical appliances, seeds and fruits, automobiles and aircrafts. China depends on over 50% of its imported seeds and fruits from the U.S.

Ultimately, China and the U.S. are stronger as trading partners than combatants in a trade war. However, policy and currency imbalances over the past 30 years or so have made China’s industry for many products simply more competitive. Trump cannot fix this before the mid-term elections, or even his own potential re-election in 2020.

While protectionism has occasionally given a boost to domestic producers throughout history, it is risky business as the added costs are parlayed onto the middle-class consumer. And, last time we checked, they didn’t have a ton of expendable cash.

Trump might get his immediate win as China likes to play the long game, and knows it has crossed a few lines over the years, be it through cyber attacks or currency manipulation; but if the stock market doesn’t get back into a bullish uptrend, Republicans could lose the House and Senate in the fall. Trump has banked much of his economic credibility on the performance of the stock market. Since announcing the tariffs barely 48 hours ago, the Dow has lost more than 1,100 points.

If Republicans lose the House and Senate it would likely result in the Democrats pushing impeachment proceedings for the remainder of Donald Trump’s first term. That will be bad for the stock market.

The self-proclaimed ‘King of Debt’ (Trump) is worried about China and trade, but he should be most concerned about rising interest rates. His newly appointed Fed Chair followed through this past week, raising interest rates a quarter point once again. The Fed’s benchmark interest rate now stands at 1.50-1.75%.

That stated, the most critical of all interest rates, the LIBOR, is rising and it could cause a lot of pain in the bond and stock market…

The London Interbank Offered Rate (LIBOR) is the reported daily average rate banks borrow money from one another at. According to Investopedia,

“…the LIBOR rates impact almost all players in the financial world from student loans holders, mortgage holders, and small business owners to corporations and the world’s largest banks.”

For the global economy, especially in the West, LIBOR represents the cost of money.

Morgan Stanley’s Chief Strategist for Asia and Emerging Markets, Jonathan Garner, told Bloomberg that the rising LIBOR rate is more important than a hawkish Federal Reserve; and, is “the story of the year.”
source: Zero Hedge

While the Bank of Canada paused its latest opportunity to raise rates, the U.S. has not. If LIBOR rates continue to rise, we are going to find out the hard way just how addicted to cheap interest rates Canadians, and much of the West, are. Canadians are carrying a record level of household debt, and rising interest rates could put a serious damper on everything from the real estate market to retail.

For Trump, the trend of rising rates and a weakening stock market, thanks to trade war fears, virtually guarantee he will be losing the House and Senate this fall.