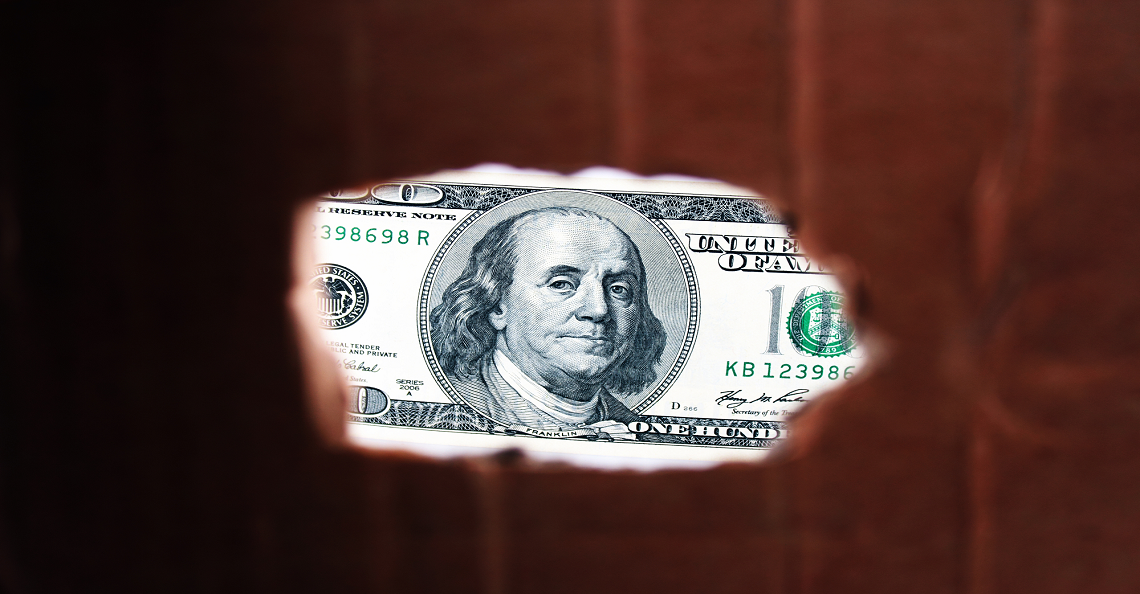 No asset influences the global markets more than the U.S. dollar, the world reserve currency. It’s held this hegemonic status for decades, dominating global commerce while serving as a constant reminder of America’s unparalleled economic, military, and political strength. Now, it appears that the only way to save the U.S. economy is by crushing the value of the dollar via record monetary stimulus.

In more technical terms, the Fed is ushering in a new era of inflation via debt monetization and expansion of the money supply.

With global debt well above $250 trillion (really think about what that figure means. According to the CIA’s World Factbook, global GDP was approximately US$80 trillion in nominal terms in 2017), even before the coronavirus, there is no place for deflation in our world. It can happen, sure. Anything can happen in times like these. But the powers that be, led by the Federal Reserve, will do everything imaginable to prevent it. Why?

Because a prolonged period of deflation would lead to a complete economic collapse, resulting in unimaginable defaults and unemployment – not to mention the crumbling of our social fabric.

The Fed, other central banks, and governments are well aware of what’s at stake – hence their proclivity to continue monetizing debt, which brings us to their response for Covid-19… 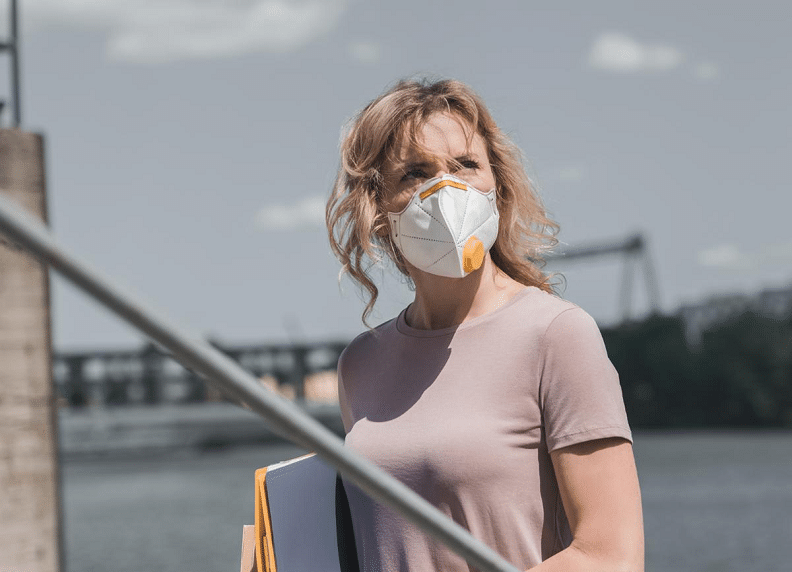 This is by far the most substantial amount of stimulus ever injected/loaned to the U.S. economy, and it has the potential to be the shortest lived.

“The package includes one-time payments of $1,200 per adult and $500 per child. It sets aside $367 billion to help small businesses and $500 billion for loans to larger industries.”

We are living through a period of fear. While there’s no way of knowing how this stimulus will affect the global economy over the long term, we do have historic precedence from a monetary perspective. This may help gauge the impact on the U.S. dollar, gold, and gold stocks.

Will History Repeat as the Stimulus Taps Flow?

Until a new monetary system and reserve currency emerge, everything centers around the dollar. Faith in the dollar reflects confidence in the world’s largest economy and its ongoing ability to service the many trillions in debt propping it up.

Over the past few weeks, the Fed and the U.S. government have taken measures which may undermine confidence in the dollar and the United States’ ability to pay its debts over the long-term.

Despite all of this excitement and uncertainty, the U.S. Dollar Index has essentially returned to its 50-day moving average, trading around 100 on Friday.

However, we have reason to believe this will change soon.

During the financial crisis of 2008 (which led to the Great Recession and subsequent rounds of quantitative easing), the U.S. Dollar Index fell into the low 70s, as shown in the chart below.

We believe a similar fall could be approaching, likely beginning before the end of the year, as new bailouts and loans increase debt. If this added debt results in inflation, which it often does, expect the dollar to fall and prices of gasoline, gold, etc., to rise significantly.

Gold Shines When the Fed Prints

It is essential to recognize just how well gold and gold stocks performed during 2009 – 2011, a period of aggressive quantitative easing.

It wasn’t so much the 2008 financial crisis itself that led to gold’s record high above $1,900 in 2011, but rather the Fed and U.S. government’s actions following the crisis. They are repeating these actions today – only this time on a much larger scale.

Analyst Jeroen Blokland, Portfolio Manager for the Robeco Multi-Asset funds, notes the U.S. Federal Reserve is now forecasted to expand its balance sheet by $4 to $5 trillion in this easing cycle, according to an F.X. Street article.

The Fed’s balance sheet expanded by roughly $586 billion in one week last month. It expanded yet another $500 billion the following week.

U.S. Dollar on the Chopping Block

Typically, investors rush to the U.S. dollar and U.S. bonds in times of crisis, such as 9/11, 2008, and the current Covid-19 pandemic. But it doesn’t last during periods of QE.

Take 2008, for example. While there was initially a massive flight to the dollar, it tanked from its 2008 peak to its summer 2011 low as quantitative easing programs were launched. During that time, gold stocks made a historic run and the dollar lost roughly 15% of its value.

For some context, the capital injections that took months and even years to happen back during the Great Recession are happening in a matter of weeks during the Covid-19 pandemic. Combined, the U.S. government and Federal Reserve have already committed more stimulus money than they did from 2008 – 2011.

The Dangers of Endless Deficits

Interest on the federal deficit is forecast to crest above 10% of the federal budget for the first time this year. That was before the government and Fed added trillions in new debt to their balance sheets due to Covid-19. Fundamentally, government debt and massive stimulus programs, such as the ones being run today, undermine confidence in the U.S. dollar.

For clarity, the U.S. only has to pay interest on public debt, which is how much a country owes to lenders outside of itself. According to The Balance and Table S-1 of the President’s budget for F.Y. 2020, the United States’ public debt is $18.087 trillion.

What happens if GDP declines 10 – 15% during this pandemic and fails to recover immediately (a realistic possibility)? The debt-to-GDP ratio would skyrocket, putting immense pressure on the government to pay its bills while negatively impacting U.S. dollar purchasing power.

“The [US] economy will shrink an annualized 34% in the second quarter [of 2020], compared with an earlier estimate of 24%, economists led by Jan Hatzius wrote in a [Goldman Sachs] report.”

It’s rarely talked about in Canadian circles, but over the last 6 – 8 years, the average Canadian has lost tremendous purchasing power, thanks to the loonie’s dramatic devaluation.

The CAD to USD conversion rate has fallen from approximately 1.05 in 2012 to below 70 today – losing more than 35% of its purchasing power against the U.S. dollar.

Canadian readers know just how devastating this loss of purchasing power has been. Traveling to Europe or the U.S. is a sobering experience for many Canadian consumers, as is buying anything made in Europe or America.

While much of the drop is tied to strength in the U.S. dollar and falling oil prices, deficit spending doesn’t help.

Canada’s Scotiabank is forecasting a budget deficit of C$110 billion in 2020 – almost double the previous record set by Stephen Harper and the Conservatives in 2009. 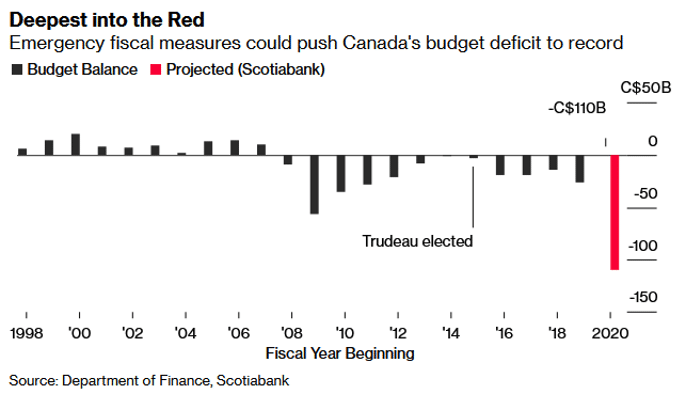 But Canada’s deficits will pale in comparison to the United States’.

“The U.S. budget deficit through the first five months of this budget year is up 14.8% from the same period a year ago…”

“The Treasury Department said Wednesday in its monthly budget report that the deficit from October through February totaled $624.5 billion, $80.3 billion higher than the same period a year ago.” 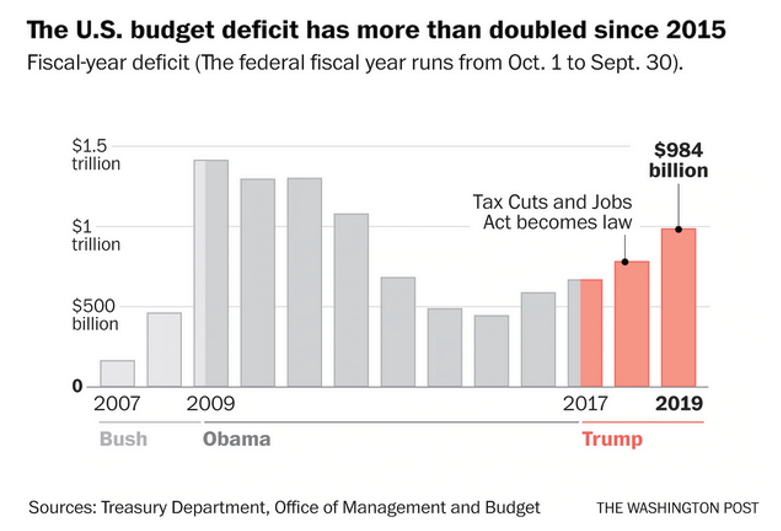 All of the fears that brought the dollar to its knees in 2011 are coming back with a vengeance today.

The difference this time, however, is that Covid-19 is hitting all countries and currencies – not just the United States and the dollar.

If the U.S. is the first country to topple the threat of Covid-19, and the U.K, Japan, the Eurozone, and China (controllers of the Greenback’s competitors) struggle to overcome the virus and get their economies back on track, all bets are off…

In such a scenario, the U.S. Dollar Index could very well hit a new all-time high.

As of now, the U.S. isn’t the only nation attempting to print away this pandemic. However, as the globe’s largest economy and bearer of the world reserve currency, the U.S. will be printing the most – and it will be doing so at a time when its debt is insanely high thanks to continual deficit spending.

Heightened inflation is the goal. Central banks will not reverse course. As lenders of last resort, they will do everything they can to prevent a sustained contraction or deflationary period. It’s fair to say that hard assets such as gold and silver – including the companies which mine these precious metals – could increase in value as they did between 2009 – 2011.

This potentially inflationary scenario brought about by record monetary stimulus is something that every investor needs to consider. In the meantime, we hope you and your loved ones stay healthy and safe.