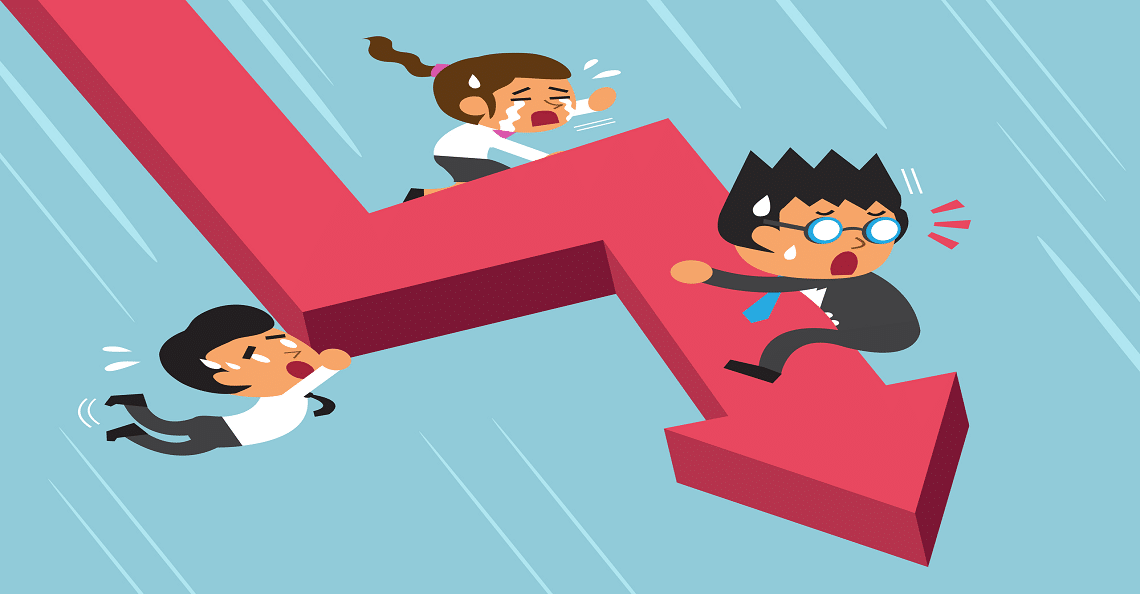 The TSX Venture is quietly in the midst of one of its more vicious sell-offs in recent history. The TSX Venture (down 1.3% today) enters in and out bear markets more often than larger exchanges. With the cannabis sector on life support, (Canadian Marijuana Index down 6% today alone) the return of a gold bull market can not come fast enough.

But we know all this. What we don’t know is when things will turn around. And, at the moment, the data behind these big moves is worrisome. I’m talking about the lack of new listings on the TSX Venture, and the amount of equity capital raised year to date.

Private Placements on the TSX Venture year to date as at June 30, 2019 (not including the slowest and most difficult period to raise capital, July & the first half of August) for equity capital raised via private placements compared with 2018 has seen a clean 50% decline. A stunning number.

In the previous year, financings totaled $2.669 billion, but have declined to $1.342 billion – almost exactly 50%. What’s more, after including IPOs and public offerings, the total equity capital raised decreases 56% from the previous period in 2018 – from $4.22 billion to $1.87 billion.

Liquidity Dries Up on Venture, Even Before Summer Doldrums

Warning signs the TSX Venture was ready to capitulate have been all around us for some time. The volume and value of shares traded continue to crater. Take a look at these numbers:

The three-year chart of the Venture tells the story.

Looking quickly at a three-year chart, one can see the Venture peaked in early 2018. The exchange hit 924.62 on 196 million shares traded that day. In the last few months, the exchange rarely trades more than 80 million shares per day with the index below 600.

The Venture hit a low of 530 on December 21st, 2018. We released reports and a video (on that exact day) calling the bottom perfectly. Every year we release a seasonal report at that time. Even at its recent 2019 peak, it never made it into a bull market, rising about 17% to 641.

Most junior mining CEOs I know are finally getting some love. Not just because gold is at a 6-year high above $1,500, but because every retail investor and their mom is finally looking away from cannabis stocks.

The biggest drag by far on both the TSX Venture and CSE is the Canadian Marijuana Index. Also known for its volatility and huge swings, the sector is bleeding out. It crash-landed below 400 Thursday, falling to a fresh 52-week low of 387, down more than 6%. The index has lost nearly half its value since March! The latest decline is on the back of more disappointing quarterly financials from some of Canada’s largest growers. The CMI is now at the lowest level since November of 2017.

While I’m not throwing in the towel on the cannabis sector, it is breaking many hearts at the moment. I still believe a sharp rebound is likely coming in the fall. The billions made in the cannabis bull market is looking to speculate on the next upswing. For the Venture to turn around, it needs a rebound in the cannabis sector or a new sector to emerge. I am seeing some of best-known market participants, from billionaires to money managers and analysts turn very bullish on gold and gold equities. For the TSX Venture, it couldn’t come quick enough.

Gold stocks, junior miners are the backbone of the TSX Venture; and, they are coming to life like a rusty old chevy after having spent a long, long winter in the barn. TSX Venture investing has always been about mining. If gold stays strong, money made in the cannabis space along with capital sidelined by the junior mining gold bear market will flow into the beaten-down exchange. I’m already seeing private placement activity pick up among gold deals and looking for the tide to turn in the final week or two of August.